Escarus’ Board of Directors is comprised of six members.

Meral Murathan is the current Chairman of the Board of Directors at Escarus, which operates with a vision to be the consultancy firm leading the support extended to sustainable development.

Chairman of the Board

Meral Murathan was born in Erzurum in 1977, and graduated from the department of Economics at Boğaziçi University.

She started her career in TSKB Treasury Department in 1998. After serving in a variety of roles and positions, she was promoted as Head of Financial Institutions in 2012. Meral Murathan promoted to Executive Vice President position in 1 April 2019.

She has been currently in charge of Financial Institutions and Investor Relations, Development Finance Institutions, Loan Monitoring, Treasury and Corporate Communications Departments.

Deputy Chairman of the Board

A notable expert in FMCG - milk production and dairy products as well as feasibility analysis and project evaluation for and reporting of energy efficiency projects to international and supranational financial institutions (The World Bank, the European Investment Bank, the Council of Europe Development Bank, the French Development Agency, and so on), Kanberoğlu has more than 20 years of engineering experience in energy efficiency, project management and environment.

After serving as an expert engineer and Manager respectively at the Department of Engineering at TSKB beginning from 1997, Kanberoğlu was appointed as the Head of Financial Institutions.

Born in 1983 in Istanbul, Seyit Hüseyin Gürel graduated from the Department of Economics at the Middle East Technical University in 2007.

Starting his professional life at Industrial Development Bank of Turkey, Gurel held various positions in Financial Analysis Department between 2007 and 2015. Gurel was positioned in Corporate Banking Department in 2015, and he was appointed as the Department Head of Corporate Banking Marketing in 2019. He was also a Board member at TSKB REIT since August 2017.

Born in 1981 in Istanbul, Ojen Arslanyan graduated from the Department of Mathematics at Yeditepe University in 2004 and Business Administration and Management as a double major in 2006. In 2007, she completed her master’s program in Economics&Finance at Boğaziçi University.

She started her career in 2007 joining Industrial Development Bank of Turkey as Management Trainee in Corporate Finance Department. After positioned in Board of Internal Auditors in 2009, she worked as an auditor between 2009 and 2011. She was then appointed to the Financial Control Department in 2011 and worked as an Assistant Manager for 2 years, working mainly on reporting and Bank’s subsidiary management. She has been working in the same department as a Manager since 2015. 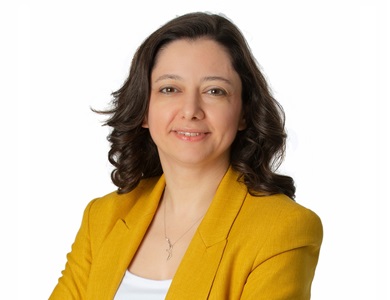 Burcu Ünüvar holds a bachelor degree in Business Administration, MSc degree in Applied Economics and Finance, and a PhD in Economics.

Before joining the TSKB, Dr. Ünüvar worked at İ.D. Bilkent University (Ankara) and Yasar University (İzmir) as full time lecturer at the Department of Economics. Her academic research focuses on monetary economics; mainly monetary policy and Central Bank communication. Prior to her academic career, she worked 10 years at investment banking as an economist.

Ünüvar has been working as the Chief Economist and the Head of Economic Research Department of the TSKB since April 2017..

Prior to joining TSKB, she managed the LEED green building certification process of a construction sector Company’s mixed-use high rise building project. Furthermore, she worked on developing real estate projects and delivering project cost control as well as project management.
Altınkulp has been working as Group Manager in the fields of development and assessment of technical feasibility studies in various sectors, corporate sustainability and environmental and social risk management at TSKB, which she started in 2014.
View More